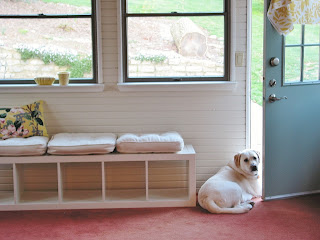 I started a make over on the sunroom last week.  Its a small 12'x14' room off the kitchen that we've been using as kind of a mudroom. Its the entrance we use most often and where we kick off muddy shoes, grab a jacket and where we keep Hunny confined when we leave the house. Majorly neglected! (the room,  not the dog) 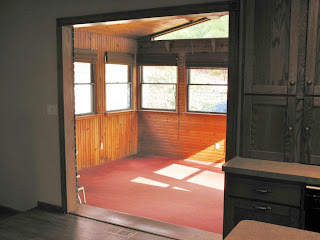 It is lined with yellow pine paneling and has faded rusty orange carpet.  And despite the 9 windows, it always seemed dark and cave-like....NOT my favorite room in the  house. The paneling bugged me the most. Now, I understand there are those who feel natural wood should be left as is, but I'm not one of them.  lol
And I think even the most die-hard wood lovers would have to agree with me in this case. The paneling appears to be pieced together from remnants (different grades, finishes, and colors) and you may also notice in the photos that on some walls its hung vertcally and on others its horizontal. There is also some exposed brick (greyish brown) thrown into the mix.
So, I decided to paint  the room and hopefully brighten the space and mask some of the craziness. 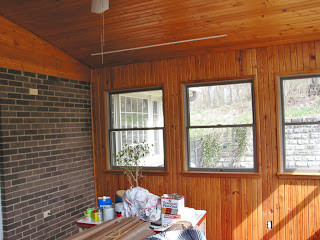 I started by removing the wood blinds, taking down the dust-collecting shelf at the peak, and wiping down the paneling. 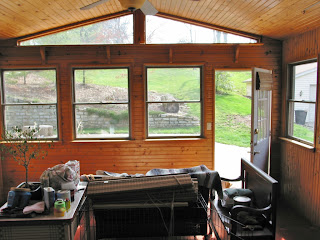 Because of the grooves in the paneling and all the cutting in around the windows, I had to paint the entire room with a brush. Fun.  But after a coat of primer and one coat of paint (Behr's paint and primer in one) I was already happier with the room. I decided not to paint the ceiling becasue I just didn't think my neck and shoulders could handle it, although I think it would look lovely in a pale sky blue. 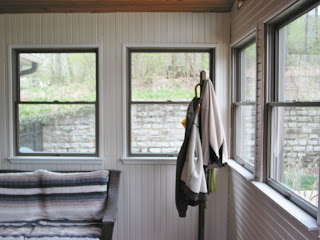 I painted the door in a blue-green color that I already had on hand and plan to use yellow and red as accents in the room. 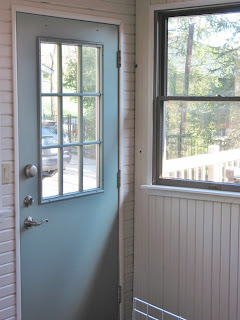 Although I like the wood blinds, I was craving somingthing a bit lighter for summer.  So I had hubby install curtain wire from Ikea so I could hang sheers.  The wires will be nearly invisible if I later want to take down the sheers and put the blinds back up. 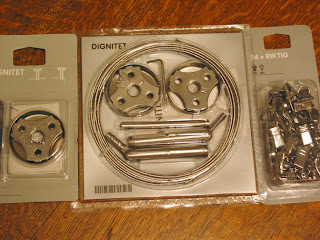 While we were at Ikea, we also picked up an Expedit bookcase and 6 Besta feet and plan to use it as a long storage bench. 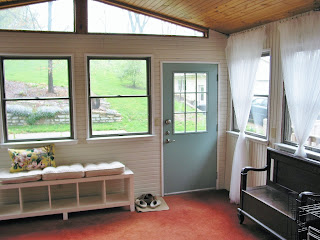 There's still some work to do. We have to trim out the gable window and then put up the last curtain wire on the wall. I'm also re-making a roll up window shade for the door and want to make a seat cushion and find storage boxes for the bench.  I would love to change the ugly carpet, but not sure that will happen just yet.  But, its already made a big difference! Its now a bright happy room that goes with the rest of the house, rather than looking like an after-thought. 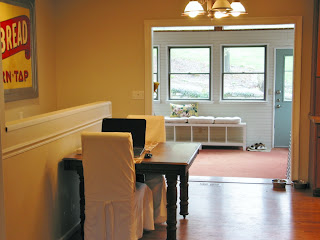 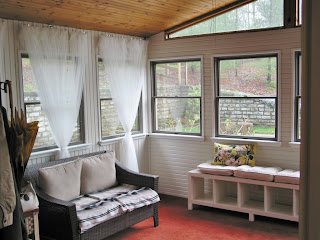 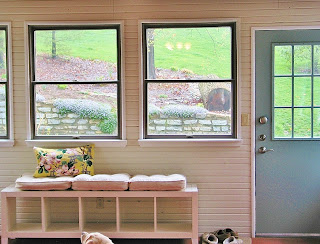 Hope to have this finished up soon, so I can show the final reveal.  :)﻿
Posted by Niesz Vintage Home at 5:51 AM 4 comments: 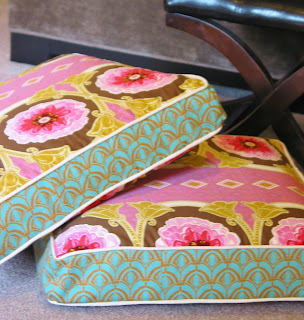 This week I made a couple of floor cushions with some of my favorite Anna Maria Horner fabrics.  My mom had saved the thick cushions from a sofa she was getting rid of and thought I might be able to use them...uh, yeah!  Foam padding is expensive!
One little hiccup in the process was that I ran out of piping.  I had bought the cream twill piping when it was on sale years ago, so I knew it wouldn't be easy finding a match. I couldn't find anything close ready-made, so I had to make my own.
I used the instructions here at Whipstitch to make the long continuous bias strip. 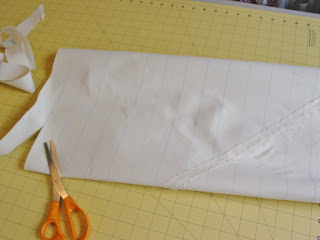 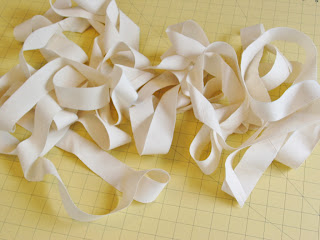 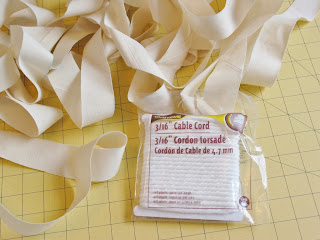 From a half yard of fabric I was able to make over 10 yards of piping! A pretty good match, don't ya think?  :) 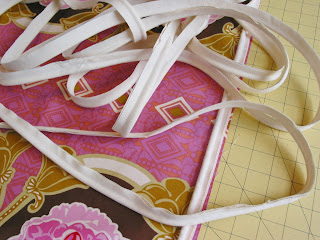 I made a zipper closure, which turned out to be much easier than I thought. And it makes for a neat and professional looking finish. (of course, it would've been better if I got it centered. lol) 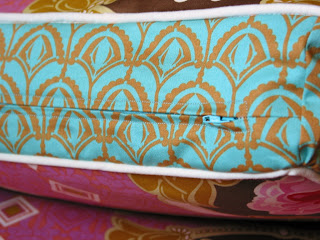 I'm using them downstairs in the family room. 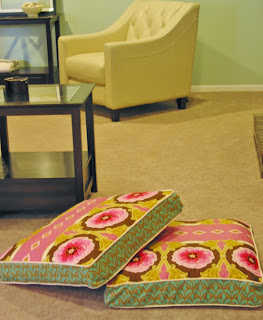 The lighting is terrible down there so the photos aren't that great, but you get the idea. :) 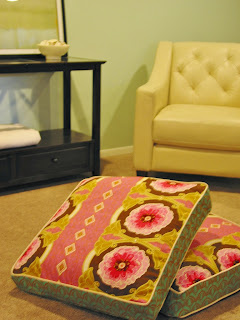 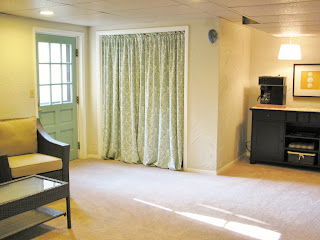 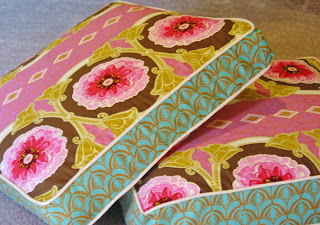 Well, that was my sewing for the week.  Its finally starting to warm up and feel like spring around here, so I'm heading out to play in the yard.  Have a great weekend, everyone!
Posted by Niesz Vintage Home at 8:10 AM 4 comments: